Are You Afraid of the Dark Wiki
Register
Don't have an account?
Sign In
Advertisement
in: Characters, Villains, Females,
and 7 more

The Dark Lady, appeared in "The Tale of the Super Specs", she was portrayed by Rachell Glait.

When an immature teenager nicknamed Weeds was fooling around with magic, he cast an actual spell. Therefore, without him

realizing it, he cast the spell of second sight. This opened a portal to crossover into earth's dimension. Also the spell was cast onto an odd set of sunglasses called Super Specs. These were the only thing that could enable a normal human being to see her invaders intruding on Earth's space. Marybeth was the first one to see them when wearing the super specs.

She usually wore a black skirt with stockings and a veil over her face . This was possibly to conceal their identities and fingerprints. Marybeth was terrified of them. She was the leader of the Dark Figures, and she kept pointing and nodding to Marybeth as if to say we're coming!

Marybeth asked Sardo for help, he explained to her that there have always different beings living on earth among humans. We never see them because they lives in alternate dimensions. Also the spell that was cast onto the super specs opened a window in her house that has allowed beings from a parallel universe to crossover and enter the real world. Some of the these living beings are good and some may be evil, and the evil ones may attempt to dangerously take over. Therefore the enchanted super specs are the only thing that can enable someone to see what is happening.

Sardo along with Marybeth and Weeds conducted a seance to reverse the spell to send the dark universe back. However, Sardo wasn't a very experienced Magician. Because soon her fellow figures became powerful enough to be seen be everyone without wearing the super specs.

Then suddenly, she intercepted Sardo and appeared in her true form which was a powerful phantom. She told Sardo and the teenagers that they tampered with the cosmic seal, and two universes couldn't exist on the same plane. Also that balance had to be restored. So since she was a true magician she used her powerful dark magic and decided to close off their universe.

Then soon enough in her universe, she spoke with Marybeth and Weeds alternate egos. They asked her if "they" (referring to normal humans) were gone yet. She told the alter egos that they also opened a door to a parallel universe. But luckily she got rid of them and the funny thing is that the humans were trying to get rid of them too.

She was then asked if they were gone, and she showed them a crystal ball and said in a deep and sinister voice that they wouldn't be bothering them anymore.

Then as she was laughing, we Sardo, Marybeth and Weeds trapped in a crystal ball (along with the rest of the universe). Therefore she and her minions supposedly took over the universe for some short period of time until someone or something defeated her or reversed the spell. 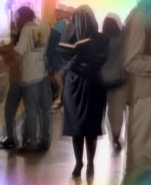 Pointing and nodding to Marybeth

Meeting with the alter egos

Revealing they are victorious

Her true powerful form as a phantom

Community content is available under CC-BY-SA unless otherwise noted.