Are You Afraid of the Dark Wiki
Register
Don't have an account?
Sign In
Advertisement
in: Characters, Villains, Males,
and 4 more

View source
watch 01:36
We're Getting Mutants in the MCU - The Loop
Do you like this video?
Play Sound

The Executioner, appeared in the episode "The Tale of the Pinball Wizard", he was portrayed Normand James.

Inside the real world, he was a dummy/mannequin. He was on display inside the window at Mr. Olson's shop. Then Ross Campbell broke Mr. Olson's trust, by playing a certain Pinball machine game when being told not to. Soon, the inside of the Shopping mall magically became the world inside the Pinball machine.

Nothing is known about his origins, or whether or not he was trying to take the crown for himself. He was an evil strong and ruthless brute who attacked his enemies without mercy. He wailed a spiky mace which he soon lost when Ross Campbell and Princess Sophie overpowered him.

Then a little while later after, The Sheriff captured Princess Sophie. He appeared in a much more muscular form with huge muscles resembling somewhat of a wrestler guard. It was possible that The Sheriff may have given him a power up boost and was elevated to this new and advanced form.

He was just about to crown The Sheriff as the king, until Ross pulled out a water gun and squirted him with water. When he was squirted he immediately was vaporized and he vanished. 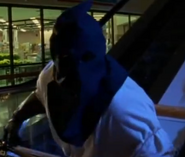 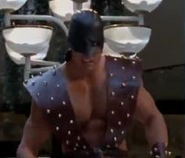 as The Wrestler Guard