Are You Afraid of the Dark Wiki
Register
Don't have an account?
Sign In
Advertisement
in: Characters, Minor Characters, Adults,
and 7 more

Reed Hansen's Uncle appeared in the episode "The Tale of the Dangerous Soup". He was portrayed by Yves Massicotte.

This man's name was unknown, but he was an uncle of Reed Hansen. His nephew was orphaned at a very young and he adopted him and raised him. He was said to be a cruel man and he treated his nephew very poorly. It is unclear how abusive he was, but it can be assumed that was physically abusive and perhaps verbally abusive to his nephew.

A short time before the events of the story, he passed away. It is unclear how he died. Just that his nephew was glad he was now dead and moved on with his on life. Just the very thought of him, would terrify his nephew.

Soon his nephew got himself a job at The Wild Boar Restaurant. The restaurant was owned and run by Dr. Vink. Dr. Vink became famous with his most popular dish:The Dangerous Soup. The soup was beyond delicious and became very popular. It made both the restaurant and Dr. Vink a fortune.

Soon Dr. Vink decided to disclose the origin of the infamous soup to his nephew. So Reed was led into a dark room, which looked like an empty freezer. He was instructed to sit down. When he did he was locked into the chair. Then the wall panel came down and a Gargoyle came out. Dr. Vink told his nephew that it knew what scared him. It turns out that Dr. Vink had somehow captured the gargoyle from a tribe of savage warriors. It used illusions to make its victims become scared. Then it would extract a green elixir. The elixir was fear itself. Which was a powerful and tasty emotion. This green elixir was used to flavor the dangerous soup to give it delicious and powerful flavor. Also when drank the elixir would give to the person their victims strength and powers.

When his nephew Reed was exposed to the gargoyle, Reed saw illusions of his greatest fear: him! His coffin appeared and his nephew slowly opened it. Then there was his body all dressed in his suit. Then when his nephew approached him, he grabbed him. The illusion of him terrified his nephew, collecting Dr. Vink a large amount of green elixir.

Soon Nonnie Walker (his nephew's co-worker and friend) opened the door to the dark room, and the Gargoyle escaped! The terrifying illusion of him had temporarily vanished. Now the gargoyle was free to cast its illusions anywhere and on anyone. So the illusion of him reappeared and he looked mad. He begun to slowly walk toward his nephew trying to apprehend him. His nephew was terrified, until he finally faced his fears. So his nephew finally approached him stating he would not let him haunt him anymore. Then after his nephew waved his arms through his illusion, his illusion finally vanished. 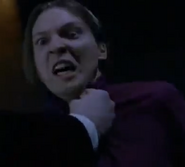