The Tale of the Crimson Clown is the Twelfth episode of the Third season of Are You Afraid of the Dark?, as well as the Thirty-Eighth episode in total.

As Kiki, Sam and Betty Ann start the fire, Frank comes in and crouches down next to Sam, taking hold of her hand and telling her he would like to go out with her the next Friday night. Sam, apparently a little annoyed, asks him if she has any say in the matter. He tells her " sure... you can say where and what time? " He then looks over to Kiki as if to say "gotta problem with that?" Kiki then responds by saying she is not getting involved.

Tucker comes in riding on Gary's back laughing away. Betty Ann's asks them what they're doing? Tucker reveals that he blackmailed Gary into being his servant for a week after finding an embarrassing poem Gary wrote. Hearing this Frank reacts thinking it's funny. Gary agreed to the deal of being his servant for a week as long as Tucker agreed not to show it to anyone. Gary getting a little annoyed with Tucker telling everyone about the embarrassing agreement tells him that, if he doesn't shut up about it right now then the deal is off.

Tucker then tells Gary to tell his story, as he has to wash his socks when they get home. Gary says he has a special story that night. There is a saying "What goes around comes around" and in his story a kid finds out, no matter what you do good or bad.. it always come back at you. Because it's great if you do something nice, but if you do something rotten Watch out! it's coming back and probably when you least expect it.

Gary throws in the campfire dust to make the fire intensify and submits his story for the approval of the Midnight's Society. Calling it "The Tale of the Crimson Clown".

Gary, tells the story. The story is about Mike is attempting to buy a gift for his mother's birthday. He takes his bratty younger brother, Sam, out to the store, telling his mom they’re going ice skating. They arrive at a store, and Sam goes to the toy shop next door. After deciding to buy his mom a porcelain statue with $70 he had brought with him, Mike opens his wallet to find his money gone.

Sam comes back and accidentally reveals a video game, Called "Zeebo's Big House" which he had bought by stealing Mike's money. Sam first lies to Mike claiming he bought the video game with his last birthday's gift money. Mike contradicts him reminding him that he spent it all on a new bike. Sam lies saying he had some left over, but Mike doesn't believe him. Sam tries to convince Mike to let him keep the video game claiming his money could be just a loan. However Mike is furious and wants to returns the video game for a refund.

They go back to the toy shop just as it happens to be closing for the day. Mike begs the owner to let them in so that they can return the video game but there’s no answer. Sam feeling he has won persuades them both to just go back home for the night. Mike motions to a clown doll on a shelf they saw in the antique store, telling Sam it’s the Crimson Clown in its dormant form, and that it comes to terrorize bad kids like him into being good.

Mike and Sam arrive home with their mom furious at them being late. Sam gets Mike in trouble by lying to their mom. He tells her that Mike didn't care how late they were going to be and he went to see his friends. His mom believes his lies because he was responsible for bringing his little brother home and being on time. She snaps at Mike for losing track of time and not caring when they would be home.

She lectures him about what his responsibilities are and how she hates asking him over again what they are. She sends Mike to his room until dinner is ready. Then Sam feeling like he has won again, goes up to his room to add the video game to his collection. Then Sam turns around to see the clown doll sitting on his desk, he is terrified seeing and screams for Mike to come help him. Mike comes in only to find the doll gone. Sam goes down to the table, unaware that the doll is hiding under his bed.

After dinner, as punishment for being home so late, their mom Makes Mike clean up the dishes with her. While Sam goes to watch a movie on the T.V., on his was he smirks to Mike as if to say "Heh I win again" Sam is enjoying watching his movie. Then suddenly he is interrupted when the power goes out. Then the rooms door slams shut, and then the Crimson Clown's arm reaches out of the TV towards Sam laughing in a sinister tone at him claiming that he is a rotten kid and is coming to get him. Sam terrified cries and screams in terrifying fear covering his face with both his arms crossed together.

Then just as Mike came into the room, everything seemed to go back to normal, and Mike lectured Sam thinking he was afraid of the movie he was watching. Sam is confused about what happened, but shakes it off and insults Mike. Just as he insults Mike their mom comes in and tells Sam it's time for bed. Sam asks their mom if he could stay up a little longer. Mike tries convince her not to because he's seen enough scary movies for one night. But she let's him, Sam however changes his mind and is about to leave, but not before once again rudely insulting his brother. Mike once again warns him to be nice or the Crimson Clown will get him. Sam tells Mike to cut it out and stop bugging him and goes upstairs to get ready for bed.

Just as he leaves their mom notices how annoyed and tense Sam seemed to be. She asks Mike what his problem was. Mike almost spills the beans that they were at a store but he tells her they were at the ice rink, and he was being a real pain. Therefore he told him if kept being bad that the Crimson Clown will get him. Their mom didn't seem to think it was nice for Mike to scare his little brother so she convinces him to apologize because he's still a little kid. Mike says he sure is little indeed a little jerk. Sam overhears the talking and Mike calling him a jerk says he says to himself that Mike is a geek.

When Sam gets upstairs he finds the door to his room is jammed, after a few thrusts and pushes it finally comes open. He trips in the doorway and when he get's up he can see the Crimson Clown doll sitting against the wall across his room. Sam is scared once again to see the doll and he cries and pleas for Mike to come help him. The Clown disappears shortly after says he tells Mike to never mind. Then suddenly his bedroom door slams shut, and the wind is blowing at him with things like bits of paper. When he realizes his window was left open, he closes it and tries to get a grip on himself.

Later, Mike comes into Sam's room and tells him there‘s no Crimson Clown. Sam falls asleep and wakes up to find himself in a warehouse full of stuff from the store. Sam tries to escape but finds himself trapped, shortly before being cornered by the real Crimson Clown and he is about 6 feet tall and has a huge creepy head. The Clown wraps Sam in ribbons shortly before Sam wakes up. He sits up, thinking it is only a dream, before realizing he is tied down to the bed with the Crimson Clown's ribbons. Sam escapes and tries to wake up Mike, only to find the Clown in Mike's place.

The Clown taunts Sam, telling him that he's been a very bad kid and no one wants him and that he has nowhere to hide. Sam tries to escape through the window, only to be confronted by the Clown. The Clown this time has a more angry look on his face with gold piercing eyes and attempts to drag him off, but Sam cuts himself free with an ice skate. The Clown then corners Sam again. Sam begins to apologizes for all the bad things he has done. Which at first the Crimson Clown doesn't believe. Sam keeps apologizing more and more, sounding more serious and sincere and and begs for another chance.

Then the room goes white and then Sam wakes up to find that the Clown has altered time so that he didn't steal the money and Mike bought Mom's present. He’s rejoiced to have another chance and he and Mike give their mom the intended present which she thinks is beautiful and loves it. Then he happily wishes their mom a happy birthday and they both give her a nice loving hug. The story ends with Gary saying that every kid deserves a second chance. So the Crimson Clown gave Sam his second chance.

At the end of the story, Gary says with a little help from Mike. Betty Ann tells Gary that it was a great story. Sam in a smart aleck tone asks Tucker what he thought of it. Tucker takes the poem out from his shirt and he is about to open it and read it.

Then he changes his mind and gives the poem back to Gary, saying he'll do his own socks. Meaning that the story possibly made him consider treating his brother more nicely.

Gary is happy to get the poem back but he feels bummed out when he sees Sam and Frank discussing the possibility of a going on a date and throws it into the fire. Frank twisting some of Sam's hair, is hitting on her and asks her if they're going out or what?

Sam tells him like Gary said, What goes around comes around. Sam then tells him "It's a real hot offer.. then she seems to be hugging him when she is actually beginning to pour the red campfire water bucket on him. Then she tells him  "But I think you need to cool off a bit". Tucker laughs thinking it's funny.

Gary offers to walk her home and she happily accepts. Leaving frank behind feeling humiliated, heartbroken and soaked. Then the credits begin, we see that the poem was for Sam anyways before the fire consumes it. 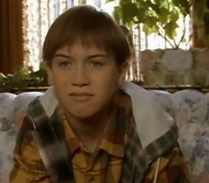 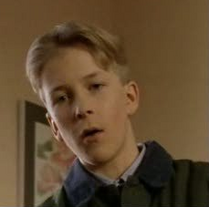 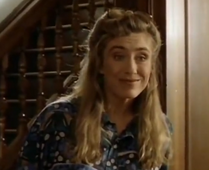 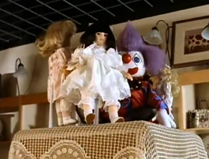 Mike and Sam keep noticing a strange dolly in the shop 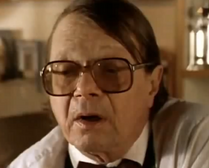 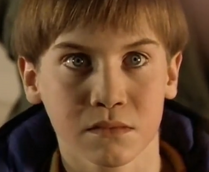 Sam seems to be freaking out over it 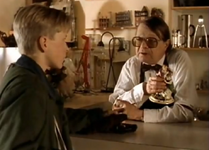 Mike has misplaced his money :(

Mike realizes Sam ripped him off!

They try return the toy but they can't! :( 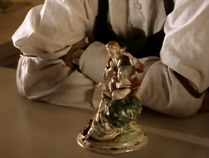 Too bad Mike can't buy it unless he has the money :( 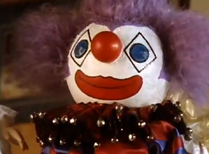 Sam gets Mike in trouble to save his own skin 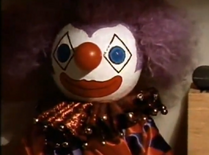 First Sam sees it on his desk 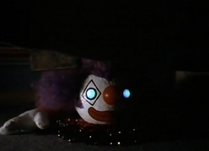 Now it's waiting under his bed..

The clown reaches out to get him from the TV 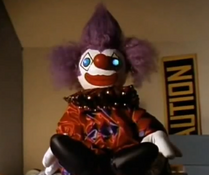 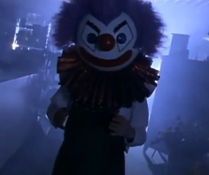 In Sam Dreams the Crimson clown is gonna get him! 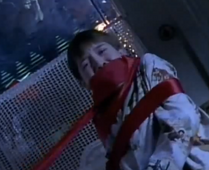 He gets tied up and gagged

He wakes up to find out it's not just a dream!

No one can help him! 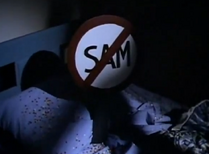 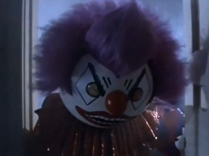 Crimson Clown closes in on him to get rid of him for being so bad! 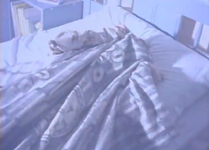 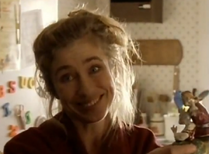 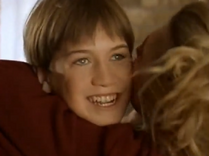 And Sam got his second chance
Add a photo to this gallery
Retrieved from "https://areyouafraidofthedark.fandom.com/wiki/The_Tale_of_the_Crimson_Clown?oldid=25067"
Community content is available under CC-BY-SA unless otherwise noted.