Are You Afraid of the Dark Wiki
Register
Don't have an account?
Sign In
Advertisement
in: Season 1 episodes, David's stories, Episodes, Stories with good endings

The Tale of the Lonely Ghost

Kristen is walking to the clearing, seemingly lost. Suddenly David bumps into her startling her. David apologizes and gives Kristen a birthday present. At the clearing, Eric is tossing popcorn and catching it in his mouth. Kiki sarcastically comments that is it such a productive talent.

Frank pours water down Eric's throat. Eric snaps at him, saying that he could have made him choke. They almost break out into a fight, when Gary breaks it up. David and Kristen arrive, apologizing for being late. Kiki is laughing explaining to them what they missed and how Eric and Frank were about to fight. As David sits down on the storyteller's chair, Betty Ann hands him the pouch of campfire dust. She tells him to hurry, since the natives are getting restless.

David explains that his story is about two kids who don't get along. This is because they are so different from each other. It is also about a love that is so strong, it can survive anything; even death forever! David, throws in the campfire dust to make the fire more intense while he submits his story for approval of The Midnight Society. He calls his story, "The Tale of the Lonely Ghost".

David tells this story. The story is about a teenage girl named Amanda Cameron. Amanda's parents were scientists studying Inuit stone carvings up north. Therefore Amanda was brought over to spend the summer with her Aunt Dottie and snobby cousin Beth, who wants nothing to do with her. Since her cousin thinks she is a geek, whom is book smart and enjoys reading and learning. Beth is seen looking out her window while talking on the phone to a friend. She rudely criticizes the clothes that Amanda is wearing.  Amanda walks into Beth's bedroom. Beth is rude, cold and unwelcoming. Stating that she won't spend her whole summer hanging out with just her. Amanda says that Beth's mom probably wants her to involve her with Beth and her friends, whom she can get to know. So Beth tells her that if she wants to hang out with she and her friends, there are several conditions: Beth wants to her to make it look like she isn't even here. So Amanda has to clean up Beth's room every morning, and she can never touch her stuff. Beth adds that she must also prove that she isn’t a total Zeeb (Zeebo pun for dweeb). Also Amanda must not tell on Beth to Aunt Dottie or Beth's nanny. The last thing is that Amanda has to spend a night in the abandoned house next door alone.

Later that night, Amanda is writing a letter to her parents and is approached by Beth's nanny. Amanda starts a conversation with her, but Beth interrupts them. Beth tells Amanda that she hates her nanny and wants her gone, and that she is crazy because of something that happened in the old house next door. The next morning, Amanda brings down she and Beth's laundry, which Nanny takes down to do. Nanny sadly overhears Beth tell her mom that she is too old for her, doesn't like her anymore and wants her gone. Her mom tells she has nowhere else to go. Then on Beth mom's way out, Beth rudely tells Amanda not to touch her stuff, while she is out roller skating.

Later that night, Beth and her friends take Amanda to the house and explain the legend behind the supposed haunting: Years ago, a little girl lived in that house and was constantly taunted by the other kids because she couldn't speak. One day, her mother found out that her overseas husband was sick. The mother sent her daughter to her grandmother's house while she went away to help him. But while the girl was walking, she was approached by mean kids. They chased her back home and locked her inside her bedroom. Unable to contact anyone, the girl died of starvation, and is now said to haunt the place as a ghost.

The girls tell Amanda that she needs to spend the entire night in the little girl's bedroom. It's the initiation for joining their club that they all had to do. They remind her, that they'll know if she's still there, by shining a flashlight at the window all night long. Amanda reluctantly takes up the challenge. Ultimately she would rather spend the summer hanging out with them instead of being all along as an outcast. Amanda slowly heads off to enter the house. Beth and her friends are seen huddled together laughing over that fact that Amanda believed this initiation was real and that all really did it. They run off together, still laughing.

Amanda enters the house and finds the girl's bedroom. She hears scratching noises and turns around to find "Help me" written backwards on the wall. The ghost of the little girl appears in the mirror. As Amanda approaches, she is nearly scared to death from the sight of her and she screams her head off. So she runs back to her Aunt's house. Then she hides in her room as Nanny watches her come in.

Back at the Clearing

Betty Ann says the story so far sounds very creepy. Kristen asks David where Beth went. David says that Beth stayed over at her friend Sally's house for the whole night, and Aunt Dottie was working late. Eric says that it means that Amanda was left all alone with Nanny. Franks says that Amanda should have stayed with the ghost. Since Nanny is a lunatic. Eric defensively says that Nanny is not a lunatic. Beth only told Amanda that to scare her. Then Eric taunts Frank by telling him that he probably didn't understand that. Gary then asks David what happened next. David explains that when Aunt Dottie got home, Amanda told her everything that happened.

Back to the Story

David continues the story, with Aunt Dottie not being one to believe in ghosts. She thought it was an act of vandalism. So she got mad. Then she sends Amanda and Beth with buckets of soapy water to go next door to clean the wall. When the girls arrive to the room, they are surprised to find more backwards "Help Me"'s written on the walls. Beth is furious with Amanda, believing that Amanda did it to get her in trouble. Amanda says no, and there was only one backwards "Help Me" written on the the wall last night, but Beth does not believe her.

Then the mirror magically changes into portal from the time period of the ghost. Beth gets hypnotized by the mass size of the girl's doll and stuffed animal collection. Beth slowly walks in to play with the toys and vanishes. The ghost of the little girl walks out in her place. Amanda screams and huddles in the corner

When Amanda calms down, she realizes that the ghost doesn't want to hurt her. All she wants is to give Amanda a locket. Inside it there is an old black and white picture of Beth's nanny. Amanda realizes that Beth’s Nanny is really this ghost's mother. Amanda figures that the girl want's Amanda to bring it back to the girl's mother. Amanda, still scared, asks the girl to unlock the door so she can go over and get Nanny for her. The Lonely Ghost trusts her and she opens the door. Amanda runs out while Beth is still trapped in the mirror, translucently appearing in it pounding and yelling for her cousin to let her out.

Amanda runs back to the house to find that Nanny about to leave for a nursing home. Amanda begs for her to go with her to the house. Nanny refuses at first saying she cannot because it will bring back too many sad memories. Then Amanda shows her her daughter's locket. Nanny, shocked to see it again, lets Amanda lead her back to the ghost. As they enter the bedroom the Lonely Ghost is ecstatic to finally see her mother again. She approaches Nanny while smiling with open arms. Nanny is shocked to see her daughter after all this time, apologizing for not knowing she was still here. The two have a tearful but happy reunion.

The ghost asks her mother in sign language to go with her through the mirror. Nanny happily agrees, and they enter the mirror together. Amanda watches, feeling happy that she has helped them. The two enter the portal and are taken back to the original time period that they lived in. From inside the mirror, both appear as their young and happy selves alive and well again. Nanny is finally happy, as well as the ghost of the little girl, who is no longer going to be lonely.

The portal closes, and it converts back to a wardrobe mirror. Beth is stuck inside of it and begs Amanda to let her out. Beth's friends arrive. The friends agree to only let Beth out on the condition that she won't be mean and bossy anymore. Beth promises so Amanda lets her out. Then Sally, one of the friends, tells Beth that they're going to have to make some changes in the group.

As the story ends, Kristen asks David what ended up happening between Amanda and Beth. David reveals that Amanda had a great summer. She even let Beth hang out with them too. (Hinting the idea that Amanda became the new group leader). Gary compliments David saying it was a good story and the others nod. Gary declares their meeting officially closed. David puts out the fire with water from the red bucket. Gary reminds them all to return again the next week.

Frank insults Eric calling him a Zeeb (a Zeebo pun) and holds him in a painful headlock. Then Frank offers to buy him a soda to cool him off. Eric leaves with Frank walking in the headlock. Just before Kristen leaves, David reminds her about the present. She's excited, telling David she almost forgot about it because his story was so good. She opens the present revealing a necklace just like the one in his story. The sentiment of his gift touches her heart and she thanks him. The final scene shows the two running to catch up with the rest of the group. 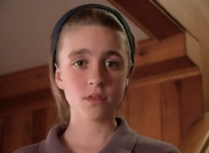 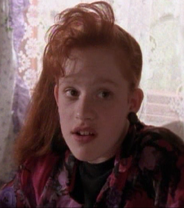 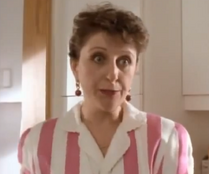 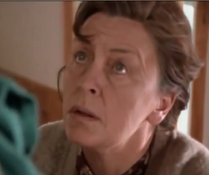 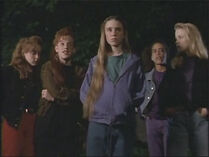 Beth and her friends 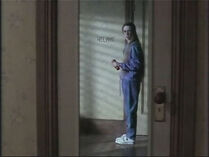 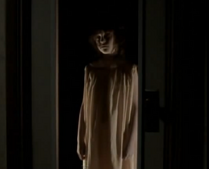 The Lonely Ghost, appears in the mirror

Amanda is scared out of her wits! 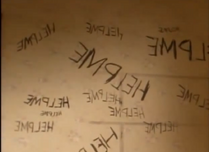 It's all one word written backwards? 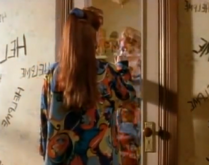 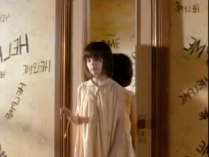 And out comes the Lonely Ghost! Amanda screams her hand off in fear once again

She slowly closes in on Amanda.. 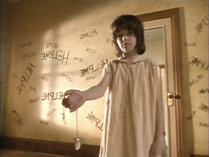 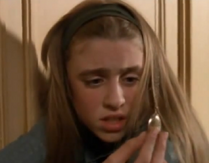 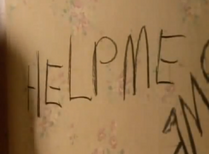 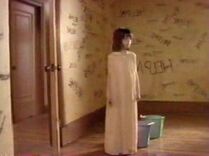 The Lonely Ghost lets her out to go get her mother The mother has been found 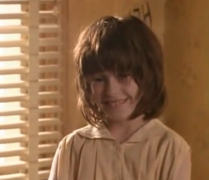 The Lonely Ghost is so happy now 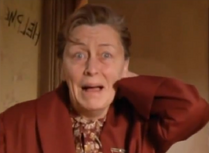 It's Nanny and she is speechless to see her 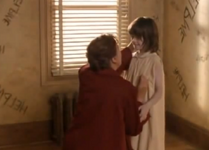 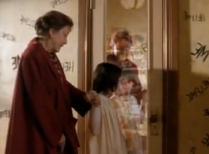 They happily decide to go back in time together 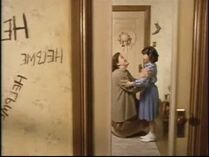