Are You Afraid of the Dark Wiki
Register
Don't have an account?
Sign In
Advertisement
in: Episodes, Season 1 episodes, Stories with good endings,
and 2 more

The Tale of the Prom Queen

One evening, what appears to be the ghost of a maiden in a white gown is slowly walking through the forest. Next she is seen walking closer and closer to clearing. The ghost's face cannot be seen because it's covered by a veil. Then we see at the Midnight Society's clearing; David is looking through his notepad, and Eric is eating a sandwich. Betty Ann and Kiki are sitting back to back besides each other. Betty Ann is relaxing and Kiki is tossing a ball up and down.

The maiden ghost continues approaching. Frank complains that Kristen is still not present. Eric cries that she's always late and tells Frank not to be surprised. Kiki says it's because Kristen takes too long putting on her makeup, and, if she isn't beautiful enough, she stays home. David tells them all that Kristen will arrive eventually and that she's got a great story. Gary reminds the other members that there are rules about people being late, but, before he goes into details, the maiden ghost appears.

The six of them are really frightened by her, and they all huddle together in shock. David nervously asks the ghost who she is. In a haunting voice, the ghost tells the group that she has come to tell them a story. Quickly, the group realizes that it's Kristen in disguise. Gary helps her with the dust, and she submits her story for the Midnight Society; she calls her story "The Tale of the Prom Queen" and begins while not breaking character.

Kristen tells this story. It is about two boys named Greg and Jam. They have gone to a local graveyard. This is where they hope to find the ghost of a girl who died in a hit-and-run car accident in May 1956. The accident happened while she was waiting for her boyfriend to pick her up for prom night, at the graveyard gates. She was buried in her prom dress. Since then, there has been a legend about her. It is said, that every year on prom night the ghost of the prom queen shows up. She stands at the graveyard gates, waiting for her beau who never came.

Then they run into a pretty girl named Dede. Dede says that she is visiting their town, in which she previously lived in a long time ago. She is bored and does not have any friends to associate with while on her visit. Also she seems eagerly intrigued with their story. So they quickly recruit her for their ghost searching mission. Then they go to the library and find the information on a microfilm reader. Then they learn the details of the dead girl's story. The girl's name was Judy Larsen, and her boyfriend's name was Ricky Mitchell. He didn't know he was supposed to pick her up by the cemetery gates on Weaver Street, because it was confirmed by his mom that he never got the message. Then when Ricky heard what happened to her, he felt so upset that he drove his car off a bridge. This took his life, killing himself in the process, and his body was never recovered. Dede sounds shocked to hear that he died also.

Then just after the three of them are finished their research, they are about to leave the darkened and dimly light resource center room. When suddenly they all hear a clunking and slight crashing noise. It is almost like the presence of someone or something else is in the room with them. They get really nervous and tense as the sounds of the noises and the footsteps get closer. Then the lights come on and it is just revealed to be the kind-hearted old librarian. All she decided to do, was cordially offer them some tea. All of those noises just turned out to be the sound of the dishes moving around as she carried them.

The next night, the trio decides to help Judy and Ricky get back together and to hold a séance at the lake to contact Ricky's ghost. They do this to let him know he was supposed to pick her up at the cemetery gates by weaver street. Also that Judy is still waiting for him. The séance seems successful as the three of them sat in the rowboat. Then they all react with a starling shock to hear the sounds of an old engine coming from the bottom of the river.

The next night, they go to the cemetery to see if Judy and Ricky will finally be reunited. When they show up at the cemetery, the three of them hear wind chimes. Then they see what appears to be a ghost wandering about. Greg approaches the hooded being. Then suddenly they hear "BOO!". It turns out it is a young man in disguise in a white hooded robe. He also has glowing flashlights on his head and wind chimes in his hand.

The third guy is introduced to be Jam's cousin Chuck. He explains that Jam asked him to pretend to be the ghost as a joke to give them all a scare. This is because Jam is positive that nothing like a real ghost could ever appear and it won't ever happen. Then Jam and chuck explain the prank while laughing the whole time. Greg is furious and ready to box their ears off. While Dede is upset asking for explanations about why their séance from the night before seemed to be successful.

Then the church bells go off, and Chuck points out that a vehicle is approaching. Greg at first, thinks it is a caretaker. So he suggests they all run to not get caught trespassing. Then Dede points out to see who it is. When realizing it is just someone random, Greg is almost ready to pound Jam again, thinking it's another joke. Then they realize the vehicle is an old 1950's Chevy glowing in the moonlight. The driver is sporting an old-fashioned greased haircut, they notice it is Ricky Mitchell. They freak out but Dede acts like everything is going to be okay.

Jam, Greg and Chuck can't make heads or tails, of the reason why Dede is not freaked out. Then Dede prepares to approach the man in the vehicle like he is no stranger. She then begins to sing along to the music playing from the car. She beautifully sings the song "In the Still of the Night" by Fred Parris and the Five Satins. Then she takes her ponytail out. Then she spins around and suddenly her clothing transforms into a beautiful blue prom gown.

She then stares at them with a thrilled and ecstatic look. She explains to them she knew they could be the ones to help her, right from the beginning. Then she explains that she couldn't leave the cemetery unless someone took her with them. Then with their help, they did research with her to find out what happened that night. After so long, she finally found out why Ricky never came. Then with their help, they did that séance to contact Ricky. Then his ghost finally got the message about where she was waiting for him.

Then she explains that her boyfriend is finally here to pick her up. So she gets into the car. Then Jam and Chuck seem completely spooked out. Meanwhile Greg just starts with complete shock and calls her Dede. She reveals that Dede is just her nickname, because her real name is Judy. This reveals that she was the ghost of the Prom Queen all along!

Then she explains to them that her ride is finally here. Then she thanks them for all of their help, promising to never forget them. Ricky also thanks them by giving them a thumbs up. Now Ricky and Judy are reunited at long last. Then they drive off into the night and go right through the cemetery gate like it is not even there. This happens as Greg, Jam and even his cousin just stare off in complete shock. They now realize that ghosts do exist! And they were associating with one all along! Greg just stares with an upset look, possibly because he has developed romantic feelings for her, and now he will never see her again. Now the ghost couple drives off, and disappears.

Then as the story ends, Kristen takes off her veil and breaks off her ghostly character and Gary declares the meeting closed and puts out the campfire with the bucket of water and tells them "Till next time, pleasant dreams everyone". 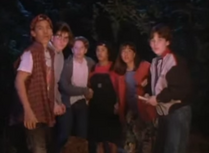 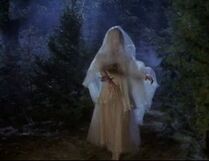 ooh Kristen dressed as a ghost! 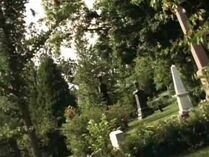 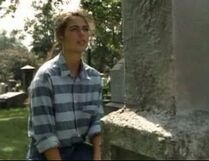 Dede aka Judy Larson visiting her own grave 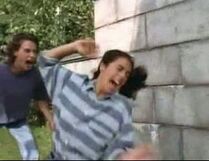 chill, were not ghosts. 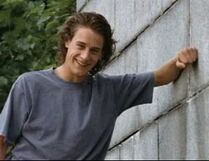 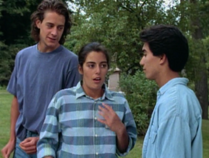 Judy terrified by her own legend 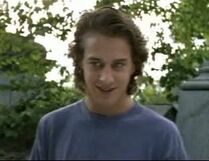 Every year on prom night the ghost of the prom queen comes back waiting for her beau. 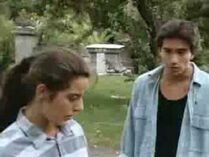 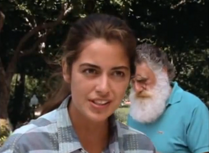 Thinking if there was a car accident. 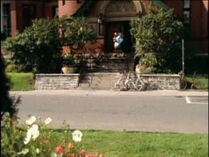 the library where they did their research 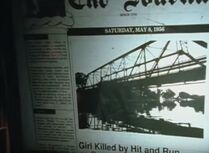 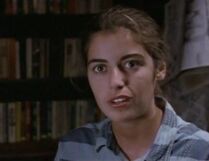 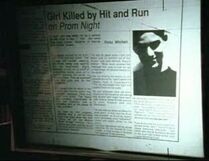 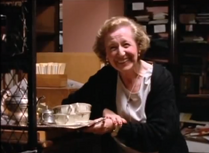 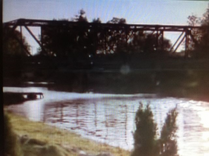 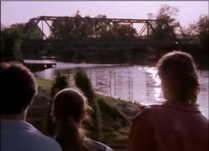 the three teens looking at the bridge where ricky went over. 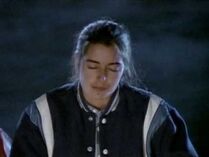 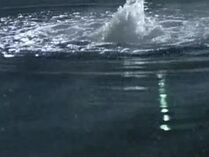 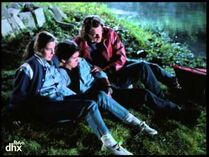 terrified from whatever it was. 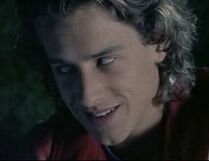 Kristin continuing with her story 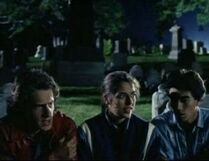 Jam pointing out a ghost 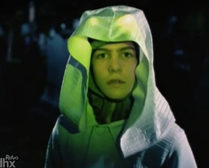 Who is that driving? 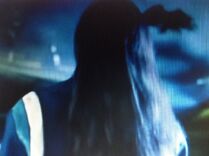 Judy letting her hair down 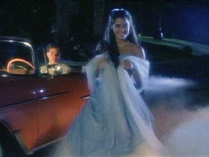 Turns out Dede is The ghost of Judy Larson. 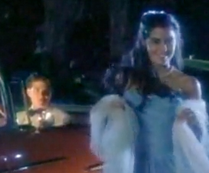 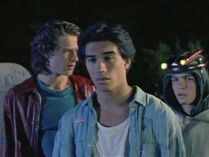 The guys are speechless 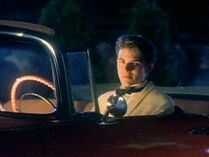 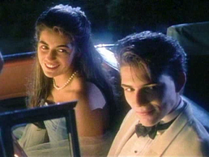 Ricky thanking them giving a thumbs up

The ghost couple going to the afterlife.
Community content is available under CC-BY-SA unless otherwise noted.
Advertisement