Are You Afraid of the Dark Wiki
Register
Don't have an account?
Sign In
Advertisement
in: David's stories, Season 1 episodes, Episodes, Stories with good endings

The Tale of the Twisted Claw

The show begins with one of Eric's stories. Tony, a young boy, encounters a black hooded creature in his dreams. He wakes up, thinking it is gone, only to find it right next to his bed screaming in terror. Scared by the story, Kristen and Kiki scream. Betty Ann, however, is excited and asks Eric what happens next. Eric leaves it as a cliffhanger because he can't think of what will happen next and saves it for another meeting. Gary announces that it's almost lights out and there hasn't been a full story yet and a meeting should not be called unless one can think up a whole story. David intervenes and tells his own, titling it "The Tale of the Twisted Claw".

David tells the story. It is the night before Halloween. Two boys, Kevin and Dougie spray shaving cream in the face of Miss Clove, an alleged witch. She backs into an expensive-looking vase, which breaks on the hardwood floor, and the two boys run away. The woman walks out onto the porch and removes her shaving cream covered glasses, looking very angry before a mischievous smile crosses her face and she cackles crazily. The scene cuts to Dougie in a mask, vying for his father's attention by pretending to choke. The doorbell rings, and Kevin enters the house in his hobo costume.

Dougie complains that Kevin dresses as a bum every year. Kevin shrugs and says, "I get the same candy." Dougie's mother shoos them out of the house as some young trick-or-treaters enter the room, and Kevin jokes, "Some of the candy's poisoned this year!" . The boys proceed through the neighborhood to trick-or-treat. As Kevin and Dougie walk down the street, Dougie complains that he wants to go home. They pass by Miss Clove's house, and Kevin decides to Trick-or-Treat there to prove his bravery. Eventually, he persuades Dougie to go as well, and they come up to her doorstep. She happily invites them into her home. Miss Clove compliments their costumes. Dougie tries to get out of there, but Miss Clove says she has a special treat for her first and only trick-or-treaters of the night. While she is out of the room, Dougie notices that she hadn't yet cleaned up the urn she had knocked over last night. Miss Clove walks in with a box, and opens it before the boys. The box plays a short tune, and Miss Clove explains that it is a vulture's claw. When Kevin shows disgust at this, Miss Clove says that it is just a wooden carving that is charmed, and whoever has it will receive three wishes.

While Dougie tries to decline the present, Miss Clove won't take no for an answer. Dougie reluctantly takes the carving out of the box, and Miss Clove warns them, "Be careful what you wish for! You just might get it." The scene cuts to Dougie and Kevin walking away, and Kevin jokingly mocks Miss Clove as a crazy old lady. Dougie says he wishes that they could stop trick-or-treating and go home. He is startled when the Twisted Claw moves, but Kevin tells him that it was probably just his imagination. The scene cuts to the two walking in a downtown area, where they find a gang of masked teenagers in an empty lot sitting around a fire. A member of the gang pushes the boys towards the others, and the gang begin to threaten them. When one of the teenagers grabs Kevin's candy, Kevin fights to get it back by pushing the teenager into his bike and the boys run away. The teenagers chase them on their bikes, and as they pass a bench, it is revealed that Dougie and Kevin were hiding in trashcans behind the bench. Kevin then tells Dougie that he got his wish, and starts to walk home.

The story transitions to a school corridor, with Dougie looking through his locker. Kevin walks up and teases Dougie with the Twisted Claw. A girl passes by and hands Kevin a flyer that mentions a popular boy at school Bostick. Kevin decides that he is going to use the claw to beat Bostick in the 600-yard race during field day. Kevin makes his wish, and the claw moves in his hand. The scene cuts to the gym teacher shouting through a megaphone for racers to take their positions for the 600. Bostick wishes Kevin luck. The race begins, and Bostick is in the lead. Dougie is rooting for Kevin on the sidelines. Kevin soon catches up to Bostick, and they are neck and neck. Dougie glances back at a tree in the distance, and an eerie growling arises. A black German Shepherd comes darting out from behind a tree, and runs in front of Bostick, making him trip. Bostick falls down hard on his knee, tumbling in circles.

Kevin jumps over Bostick on the ground and crosses the finish line. Kevin runs to Dougie and rants about how he won, and Dougie tries to explain about the black dog, ran by and tripped him. The Gym Teacher calls an ambulance for Bostick, because it looks as though he has broken his leg from the knee down. Kevin seems guilty wondering if it really was an accident. Dougie mentions the dog that ran by and tripped Bostick. However, it now seems to have disappeared.

Back at the Clearing

Kiki mentions that so far Dougie and Kevin each used up one of their wishes. Gary remarks that something evil happened each time. To make the wishes come true. Eric says that he would wish for one million dollars and just take his chances. Kristen is excited so she eagerly asks David what will happen.

Back to the Story

David continues the story explaining on that night, Dougie's parents went out to dinner, and Kevin came over with his medal for winning the 600. Dougie is stressing over the Twisted Claw's power, but Kevin tells him to get over it. Dougie suggests to return it to Miss Clove and tell his parents. In a fit of rage, Kevin grabs the claw, and wishes that Dougie would just lose his folks. Dougie starts to yell at Kevin for making a wish of losing his parents when the phone rings. Dougie answers it, and it's the police, informing him that his parents got into an accident and are in the hospital. Dougie throws the phone to the ground, breaking it. Kevin tells Dougie to wish for his parents to be ok, but Dougie says everytime they wish for something, something goes bad. Dougie then accidently says "I wish gramps were here, he'd know what to do."

The claw twitches, and Dougie throws it across the room. Kevin then remembered that Dougie's grandfather was dead as a car pulls up to the house. Dougie exclaims that it's his grandfather's car, and Kevin becomes very afraid. Kevin runs for the claw, preparing to make a wish, but Dougie tramples him, knocks it from his hand, and exclaims that it would just turn bad, and that his grandfather may just be a skeleton. Kevin still tries to get the claw back, when the doorbell rings. Kevin grabs the claw, gives it to Dougie, and tells him to wish it away. Dougie wishes that they had never broken Miss Clove's vase and the claw disappears. The doorbell rings, and Kevin tells Dougie not to answer it, but Dougie does anyway. Kevin dashes under the table as Dougie goes to the door. He opens the door, and standing there are his parents.

Dougie's mother explains that they left their keys, while his father says hello to Kevin. Dougie then hugs his parents, and his mother goes to get some ice cream. Dougie and Kevin look at each other in shock and outside, where Dougie's grandfather's car is gone. The two rush to the phone, which is laying neatly on the table in one piece. Kevin looks in his pockets, and his 600 medal is gone. The doorbell rings once more, and the boys go to answer it. Sitting on the doorstep is the vase, all fixed, with a note on top, which says "trick or treat".

As David ends his story, it cuts to Miss Clove's house, with the door and gate open, while the wind is blowing with the sound of the cackling of Miss Clove in the background. Both the door and the gate close by themselves. As David ends his story, his friends look at him impressed. Betty Ann and Eric smile and Gary declares the meeting officially closed . Gary says "Until next time, pleasant dreams everyone." Then Gary puts out the campfire with the red water bucket. 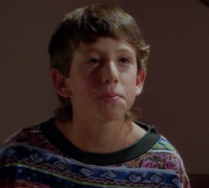 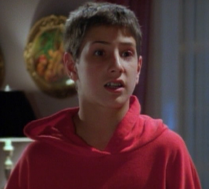 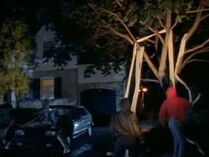 Preparing for their prank 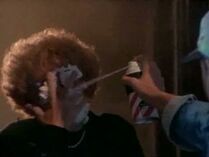 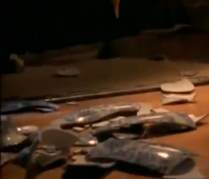 The vase shattered on the floor 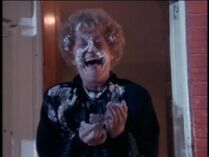 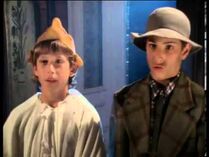 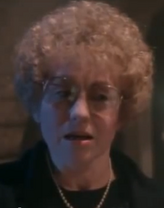 They actually had the nerve to go and see Miss Clove again!

A surprise in the mysterious box 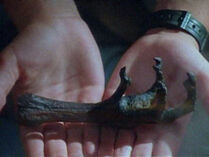 Given the vulture's claw 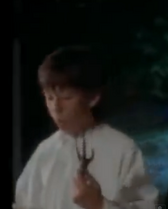 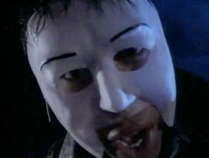 They get ambushed by punk bullies 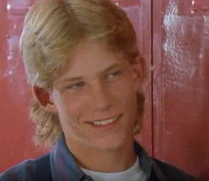 Kevin is envious of Bostick's talent 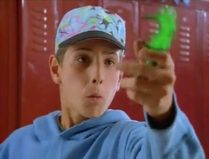 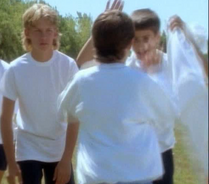 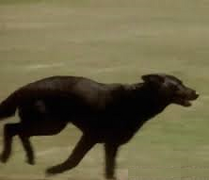 The wish makes a dog appared from nowhere?

The dog comes running by and trip Bostick! 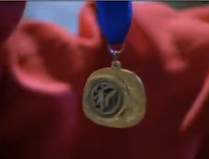 Kevin's wish came true and he won the race:) 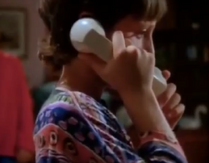 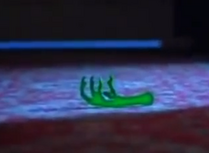 Dougie mistakenly wishes that his wise and helpful, deceased Grandfather was there 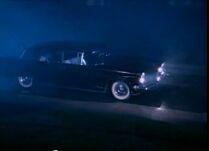 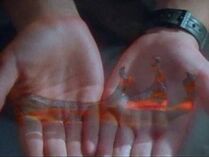 Wishing the claw away and it vanishes 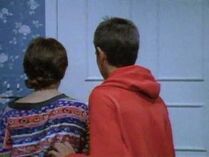 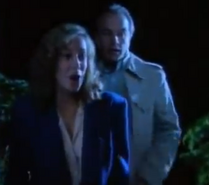 turns out to be Dougie's parents and they're just fine 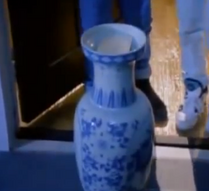 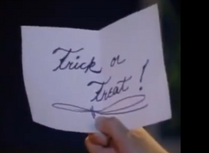 The joke was on them! 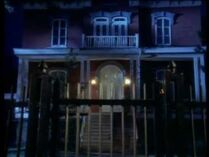 Evil cackling is heard in the background of Miss Clove's House!

TV schedule showing the Tale of the Twisted Claw's first appearance on Nickelodeon
Community content is available under CC-BY-SA unless otherwise noted.
Advertisement