Are You Afraid of the Dark Wiki
Register
Don't have an account?
Sign In
Advertisement
in: Characters, Kids, Males,
and 3 more

Tony appeared as a minor character in the beginning of episode "The Tale of the Twisted Claw". He was portrayed by Christian Masten.

Briefly created in an attempted story by Eric, not much was known about him. Only that he was having recurring nightmares about a black hooded shade haunting his bedroom. In his dreams it kept showing the shade coming for him as he slept in his bed. And he was trembling in fear, realizing it was coming for him. When he woke up in the morning, he thought it was another bad dream. Then as he turned around to get out of bed, there was the shade! He screamed his head off! However what ended up happening to him is unknown. Since Eric got writers block and ended his story with a cliffhanger.

It's coming to get you! 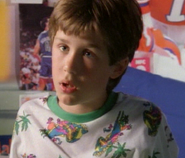 I hate that dream...

OMG it is really here! 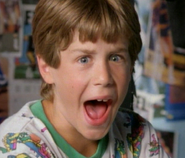